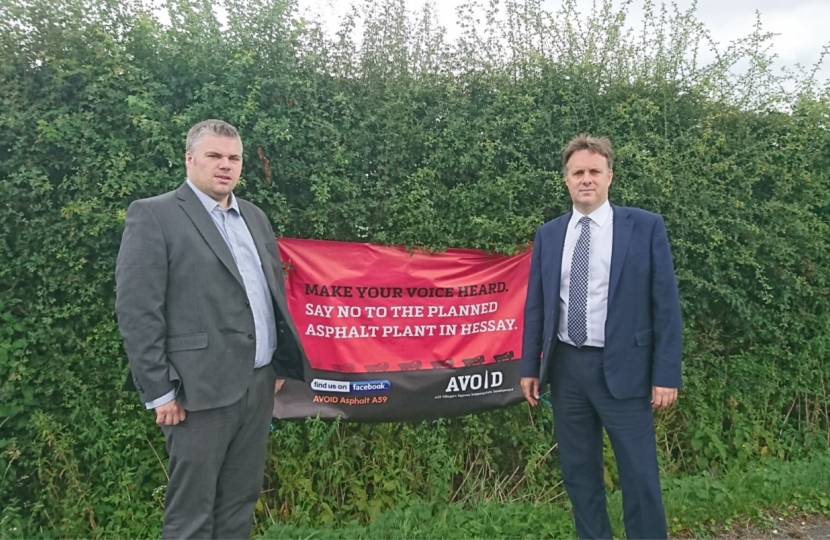 Tynedale Roadstone Ltd applied for planning permission to build the structure at Hessay Industrial Estate where asphalt would be produced for surfacing companies. It is estimated that the asphalt plant would generate an additional 176 daily vehicle movements, including 90 HGVs on New Road which is already congested and very narrow.

City of York Council officers recommended the proposals be refused because the site crucially lies on the Greenbelt and special circumstances could not be proved by the applicant.

Commenting Julian said, “The decision by the Planning Committee to refuse this application is fantastic news for local residents and all commuters using the A59. Special circumstances could not be demonstrated to justify the encroachment of this proposed development onto the Greenbelt and it was on these grounds that the application was rightly refused.

I would also highlight the significant and detrimental impact this proposal would have had on the local transport network as a further reason which should have been more properly considered in the refusal process. Particularly, the safety risk at the A59 junction.

I must commend the determined efforts of the Hessay community in the way they have rallied together so successfully to oppose this controversial application and ultimately protect their local area.”

Commenting Cllr Chris Steward said, “I am delighted the Planning Committee has bar one abstention unanimously rejected the application. There were problems over the noise and lighting but for me the transport issues were in no way satisfactorily addressed. It was also totally clear there are no special circumstances for this Greenbelt development, it would merely have made life easier for a business. I salute the excellent work done by the whole community in so tirelessly and effectively opposing the application.”