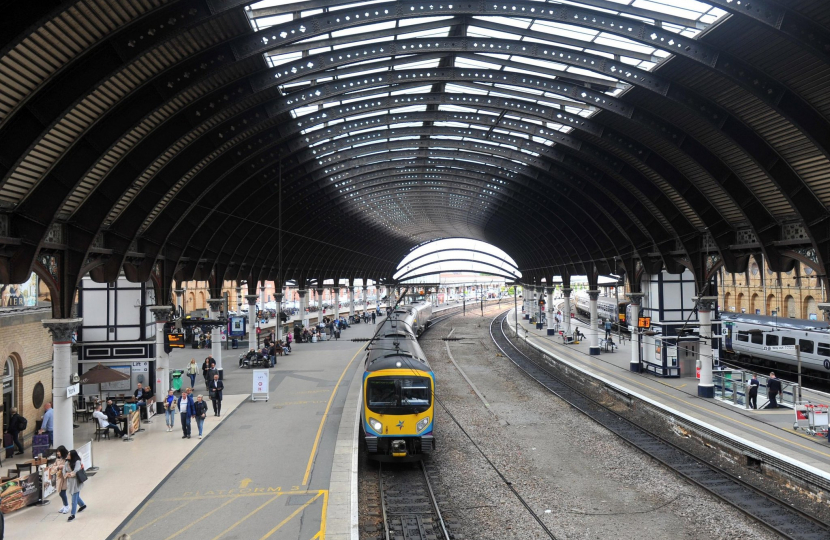 York Conservatives have eagerly welcomed the formal launch of the competition to find a home for Great British Railways and enthusiastically back York as the ultimate choice.

As part of the Conservative Government’s commitment to level up the country, the new Great British Railways HQ will be based outside of London and bring a number of high-skilled jobs to the winning location.

Local economies will be further boosted by a number of regional headquarters based across the country, putting decision making and investment at the heart of the communities who use those railways day-to-day.

Bids to house the new HQ will be measured against six criteria:

The GBR transition team will shortlist the best applications in May, after which a public vote will help determine the winning location.

Local MP Julian Sturdy has already been campaigning for York to be the home of Great British Railways and held a Westminster Hall debate on York’s bid in November, making York the first location to present their case to the Railways Minister.

In the debate, Julian stressed both our world-famous railway heritage, exemplified by the National Rail Museum and a station that was the largest on earth when first opened in 1877, and our successful modern rail industry and connections.

Furthermore, rail employs some 5,500 people in York, a full 10 per cent of the national railway workforce. Our city’s geographical position also makes it a strong contender, situated both near the centre of Great Britain and the heart of Northern England. Julian also emphasised the potential of the York Central development as a base, the largest brownfield site in Europe.

While there will be tough competition from rival cities, Julian will continue to press the case with Ministers and is confident that York can get over the line if it is chosen to go through to the public vote.