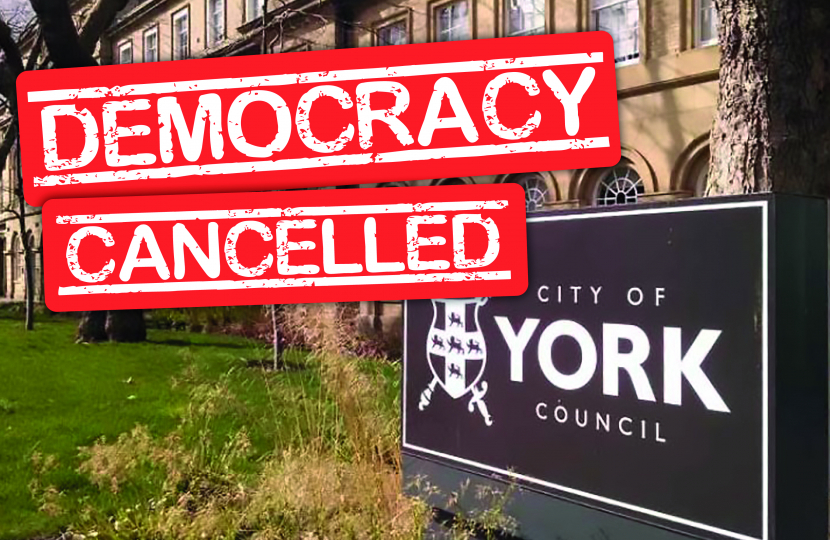 York’s Conservatives have slammed what they believe is the illegal decision to move a City of York Full Council meeting online and then postpone or cancel it. The reason for the change is the Lib Dems have a number of members who are ill and therefore at first wanted to meet online but now do not want to meet at all. Councillors or MPs being ill or otherwise unavailable has been an issue since democracy began but meetings are not simply cancelled for it. Yet such is the outrageous behaviour of the Lib Dems that rather than risk losing some votes they and their Green Party puppets are just dispensing with democracy for a few weeks until they have their councillors back.

The Council is misleadingly referring to the meeting being adjourned but that is of course not the case. An adjournment would imply council meeting and breaking off but the reality is we do not know when Full Council will meet, all we know is that a meeting in the diary for months simply is not taking place and York opposition councillors are silenced with the Lib Dems and council staff just carrying on regardless.

The Lib Dems in York have long treated democracy with contempt but until now this has been confined to the likes of consultations and secret decision making. It is utterly absurd that the arrogance is now such that they choose to make meetings Zoom only and then simply cancel them as they may not have all councillors in attendance. However this is not just any meeting it is the Full Council meeting, which is vital to our decision making.

I can think of no precedent for this. There have always been councillors who have been unavailable whether through work, holiday or illness. Meetings have never been changed like this and this must be setting an incredible precedent that one too many councillors with a sniffle or a group facing a difficult vote with members unavailable simply ‘postpones’ the meeting.