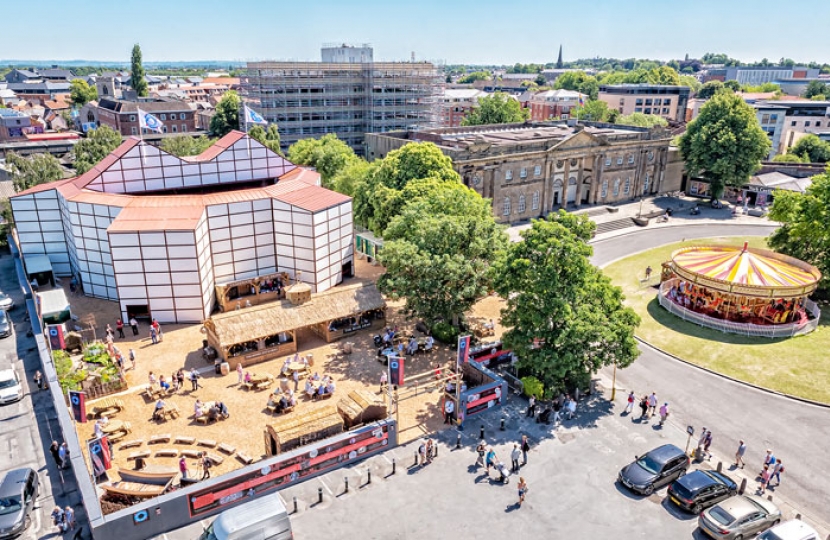 Council leaders will be asked to consider the return of this summer’s very successful pop-up Rose Theatre and a new Viking Experience event on Castle car park, subject to planning permission and other relevant statutory approvals, at their Executive meeting on Thursday 25 October.

The council has also been approached by Yorkshire based Bifrost Entertainments with a proposal for a Viking Hall on part of the car park between 18 January and 3 May 2019. This would be focused on a Viking Great Hall and courtyard theatre, creating an immersive, 360 degree performance space with a capacity of about 100 people per show.

The installation would also include a Viking themed homestead featuring food and beverage outlets, box office, sheltered and unsheltered seating, entertainment and demonstration stage and the potential for a craft and skills market.

Under both schemes the council will be reimbursed for the full cost of the spaces both events use.  The revised parking arrangements worked well with pop-up Rose theatre this year, with a significant increase in overall parking income to the council when cars displaced from the area parked elsewhere.

The proposals tie in to the council’s wider regeneration Castle Gateway masterplan, which was approved by the council’s Executive in April 2018. This provides a long-term spatial plan for the regeneration of the area with an emphasis on repurposing Castle car park as a more fitting backdrop for Clifford’s Tower and an area which will be able to play a key role in the enjoyment of York’s city centre .

Cllr John Galvin, Conservative spokesperson for culture, leisure and tourism, said: “The Rose Theatre was a huge success and  helped to challenge the perception of what the Castle car park could be in the future.  This is key to our Conservative-led administration’s vision of a reinvigorated Castle Gateway area, with the car park playing a new role as an attractive outdoor space and heritage backdrop for and focal point for new, temporary events in the city centre.

“The return of the Rose Theatre will mean even more visitors to this area next year, and the Viking experience, a different kind of offering which should be very attractive to family audiences, both demonstrate what a fantastic venue Castle car park can be- and one certainly can’t beat the setting!”

Executive takes place on Thursday 18 October from 5.30pm and is open to members of the public or is available to watch live online from:www.york.gov.uk/webcasts