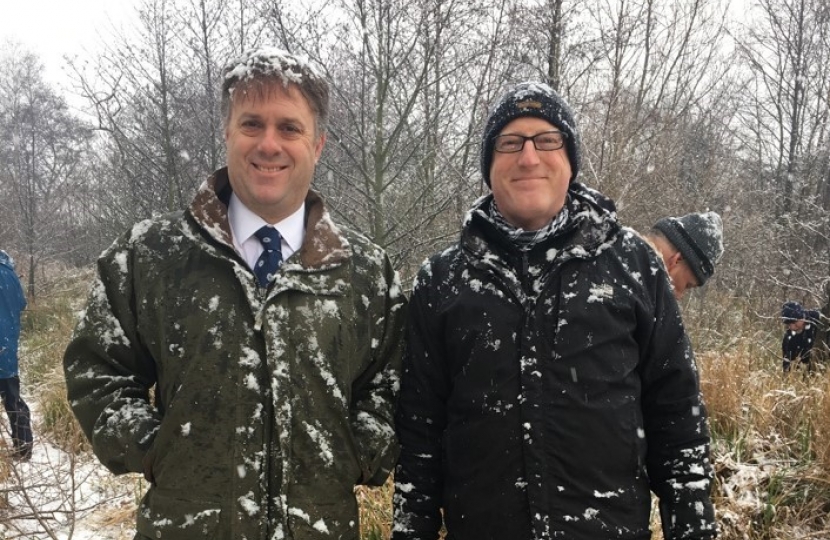 Earlier this month, Conservative MP for York Outer Julian Sturdy met with Rob Stoneman, Chief Exec of the Yorkshire Wildlife Trust (YWT) at a very wintery Askham Bog to discuss their objections to the proposed development site on Moor Lane and hear more about YMT’s vision for an ambitious Environment Bill.

Last summer, Julian wrote to residents regarding the land south of Moor Lane to outline his concerns that a planning application may be submitted again to build on it. Indeed, in late November, plans for up to 516 properties, a sports pavilion, a local centre and associated landscaping were submitted.

On hearing this news, Julian wrote again to all residents on Moor Lane in December to make clear his strong objections to this resubmitted application on a greenbelt site and to encourage residents to submit their own comments.

At the meeting, Julian and Mr Stoneman discussed how the land north of Askham Bog SSSI in which the development is proposed plays a critical role in the unique ecology and hydrology of this precious nature reserve. Specifically, any development on this land could disturb the sensitive local water table which the diverse nature and wildlife at this site rely on to survive and thrive.

In addition to the significant environmental impacts, Julian is clear that the current proposals would also put great strain on the existing amenities in the area, such as the local transport network, local schools, and community facilities. Of particular concern would be the impact of over 500 extra houses on the Moor Lane/Tesco roundabout, which as residents are well aware of, is already extremely busy at peak times.

Commenting Julian said “I really admire and value the work YWT are doing across Yorkshire to bring people closer to nature and restore wildlife. The way they have launched and promoted their #SaveAskhamBog campaign has been astounding, with over 7000 people supporting their objection to the proposed development. It is vital that we do everything we can to protect this exceptional site for wildlife and the cultural value it adds to our great city.”

Julian also discussed with YWT how upcoming legislation can help secure the recovery of nature in Yorkshire and provide everyone with an opportunity to experience the joy of wildlife in their daily lives. In July 2018, the Prime Minister announced that the Government would be introducing the first Environment Bill in over 20 years. This, alongside the ambitious Agriculture Bill and Fisheries Bill creates an opportunity for the UK to take an international lead on legislation aimed at transforming and improving our environment for generations to come.