Strensall Conservatives Back Towthorpe Residents In Call For Speed Reduction 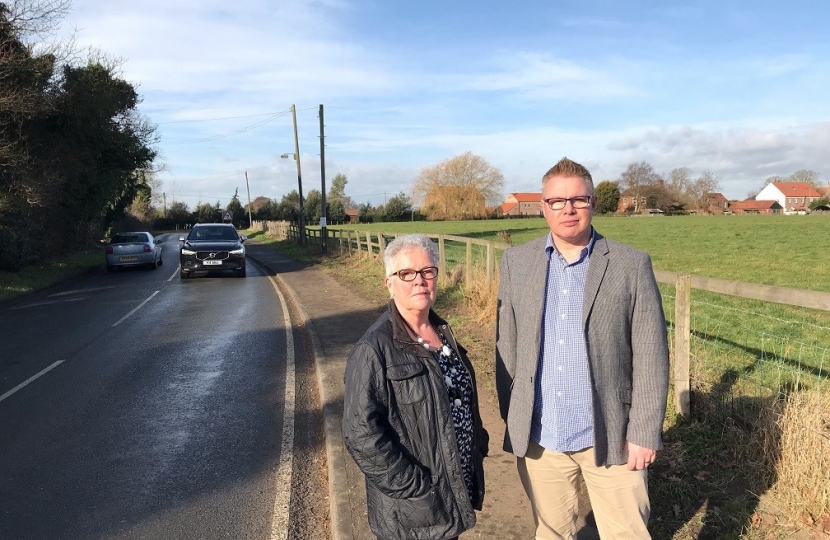 Strensall Conservative Councillor Paul Doughty and fellow Campaigner Sian Wiseman are giving their full support to calls from local residents to lower the 60mph national speed limit section through Towthorpe, for the section of Towthorpe Road between the junction with Strensall Road and the end of the built up part of Towthorpe This will be backed up by a petition signed by villagers which will be presented by Councillor Doughty at the meeting of Full Council next Thursday.

Councillor Doughty explained, “While chatting to residents on the doorstep in Towthorpe, it is clear they are very concerned with the 60mph national speed limit directly outside their front doors. There are two sharp bends on this section of the road and residents told Sian (Wiseman) and I about several accidents on this road in recent years. We are joining their calls for the speed limit to be dropped to 40mph and we believe that with the new homes built in the last few years, the very strong case to do this is strengthened.”

Sian Wiseman added, “It is felt very strongly that this would help make the road safer for all users and particularly for residents of several homes who have no pavement at the end of their drives. We’re hoping Officers and statutory consultees will agree with the local community. While knocking on doors with Paul, we have not been surprised to find that everyone we have spoken with so far have agreed with our suggested proposals and signed the petition.”

Both Paul and Sian believe this speed reduction would be a natural addition to the successful speed reduction trial programme initiated by Conservative Executive Member for Transport, Cllr Peter Dew, following their previous campaign for the main road between Earswick and Strensall.