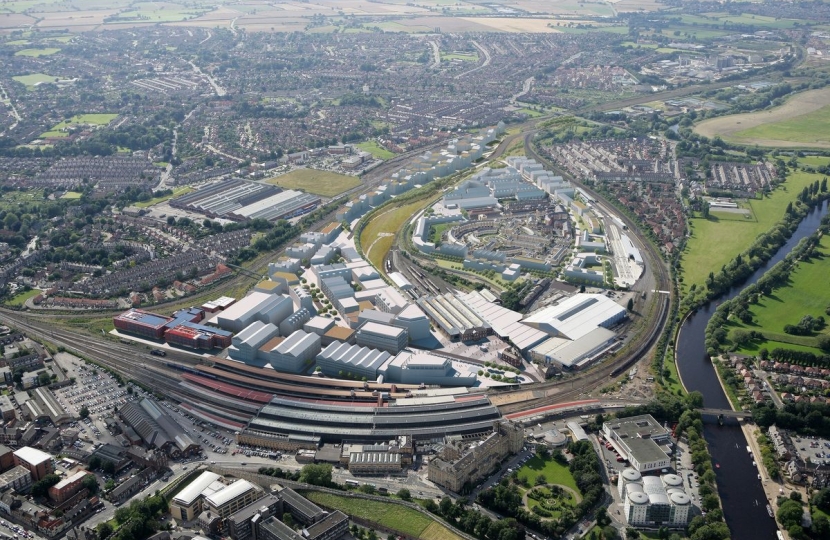 York Central, the city’s huge 72 hectare brownfield development site, will be on the agenda at next Thursday’s meeting of the Conservative-led Executive, which will consider the investment case for the York Central Enterprise Zone and recommend that full council establish a capital budget to implement the project .

The report recommends the creation of a budget totalling £155m to fund core infrastructure on the site. Key to development and included in this budget are a new access road, bridge and spine road along with enabling works such as site clearance, demolitions, utility diversions and drainage.

The infrastructure fund will also deliver a sizeable new park, create high quality public squares to be integrated into the built development and create a new western railway station entrance. A network of pedestrian and cycle routes through the site will integrate with an upgraded public transport hub around the railway station.

The proposed budget is funded by a combination of external grants, contributions, previously agreed approvals and also council borrowing. The report proposes that the council borrows £35m  which will be repaid using retained business rates from the York Central Enterprise Zone.

Leader of City of York Council, Cllr Ian Gillies, said: “York Central is one of the largest brownfield sites in England and represents the biggest opportunity for development and regeneration in the city for generations. The size and scale of the area has the potential to provide new homes, Grade A commercial space, an enhanced National Railway Museum and a range of new public spaces and facilities.

“To build the necessary roads, bridges and utilities to begin development we’ve put together a strategy securing funding from several different sources, with contributions from the Housing Infrastructure Fund, York, North Yorkshire and East Riding LEP and the West Yorkshire Transport Fund. This will allow us to ensure that the York Central Partnership can unlock the site whilst guaranteeing the area meets our objectives for the city and for communities, without exposing the council to unnecessary financial risk.”

If the Executive approve the report the decision will be considered by full Council in December.  Executive will then need to approve specific work packages when they are ready for funding from this budget.