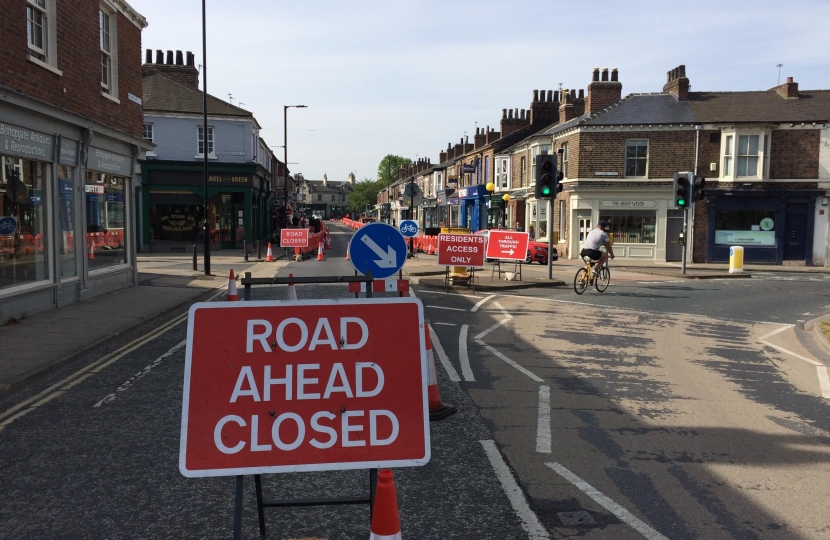 City of York Council’s Conservative Group has called for the end of the restrictions on Bishopthorpe Road which it believes are doing more harm than good. A few weeks ago the Lib Dem and Green coalition stopped traffic travelling towards Bishopthorpe and instead forced residents on an array of d-tours. The coalition claimed it was to broaden the pavements for social distancing but in reality given the pavements are very wide it is being widely criticised as the Lib Dems and Greens sneaking through another anti car measure.

Their calls have been backed by Mike Nicholls who is the party’s campaigner in Bishopthorpe and believes his residents have been adversely impacted more than anyone else.

Mike said ‘this change was brought in by the Lib Dem and Green coalition with no true consultation with residents or businesses. The road looks utterly chaotic with no fewer than 12 signs facing drivers who are able to get through. I am sure some residents in the immediate vicinity do support the closure but as with the earlier Lendal Bridge trial this is about a key York strategic route. Many Bishopthorpe residents I have spoken to feel this needlessly cuts them off from the city and makes an already tough time even worse. As so often, this administration seems to be using a stick to beat the motorist rather than a carrot to encourage them’.

Conservative Group Leader Paul Doughty said: ‘whilst we are told that this is to enable social distancing on pavements in reality these are some of the city’s widest pavements. Covid 19 is being cynically used by the Lib Dem Green coalition as the next stage in the war on the motorist. We are seeing vehicles go on lengthy diversions down Blossom Street and cutting through Saint Benedict Road and causing residents serious problems and increasing congestion. Most ridiculously, as my colleague Martin Rowley pointed out to the administration, if any direction was to be closed it should be the other way as many funeral corteges going to the crematorium now have to go a convoluted and undignified loop round. We believe the road should be reopened now and we should trust York residents to behave rather than make their lives difficult’.

The City of York Conservative Group has said it opposes City of York Council’s plan to make Marble Arch one way to traffic at any one time with new traffic light signalling.