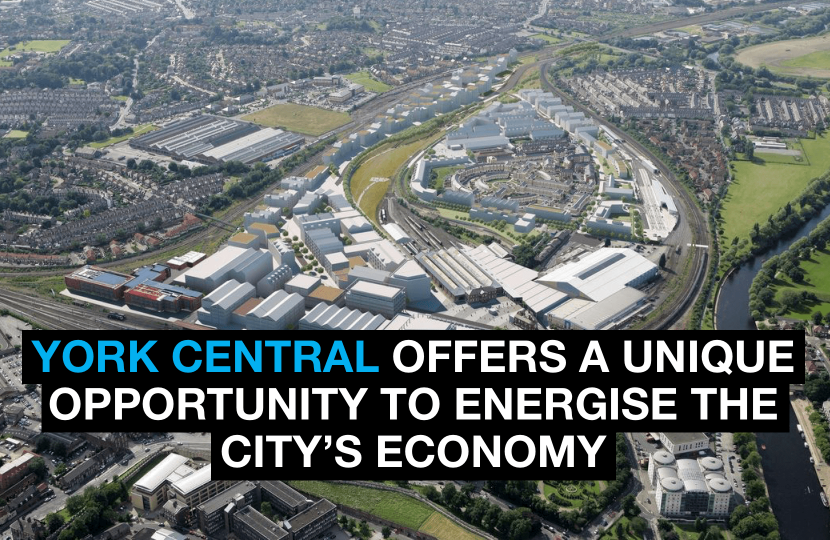 The York Central development will potentially take another step forward next week when the council’s Conservative-led Executive will consider moving forward on the major access route to this massive land-locked brownfield site, which holds tremendous potential to provide jobs, homes, public spaces and huge economic benefits for the city.

A report published ahead of next Thursday’s Executive meeting recommends that councillors commit to the siting of the access road, bridge and spine road in order to bring forward a planning application which, if approved, will allow development of the site to begin.

The western access option, which will see vehicle, pedestrian and cycle access from Water End, was chosen as the preferred option in March following extensive public engagement. It involves utilising a small area of the Millennium Green in order to make construction of the bridge viable.

Following consultation with local residents, the Millennium Green Trust has agreed a package with the York Central Partnership which includes a license to use some land during construction, the landscaping of this land when the access road is finished, the provision of alternative land to replace the area taken back by the council (an option included in the original deed tot he Trust) and a payment of £375,000 to the Trust to secure the future of the Trust and to fund an ongoing maintenance programme.

If Executive approve the proposals, a planning application for the access road would be submitted in September with a decision expected by January 2019. This could mean that construction of the access road could take place as early as March of that year.

“We consulted extensively on the best location for the access road, which had a major impact on the choice of the Water End option, and we will continue our ongoing conversation with communities closest to the development to make sure that the voices of residents continue to be heard.

"Accessing the site has always been the big difficulty with unlocking that potential, so it is encouraging to see this amount of progress and we would like to thank the Trustees of the Millennium Green Trust for all their positive co-operation to reach a constructive agreement."

The council's Executive will meet at 5:30pm on Thursday 30 August at West Offices, Station Rise, YO1 6GA. The meeting will also be broadcast live on the council's website. To read the report, including the full list of recommendations and funding details, go to http://democracy.york.gov.uk/ieListDocuments.aspx?CId=733&MId=10471&Ver=4