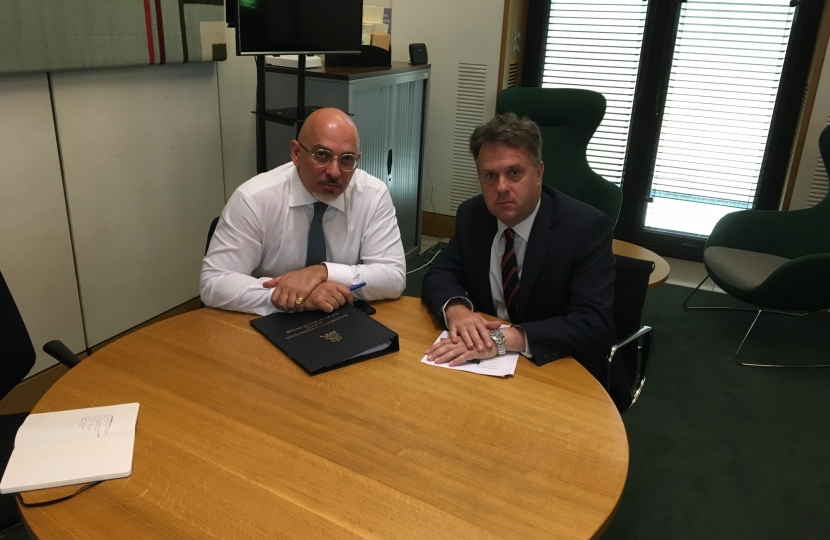 Julian Sturdy, Member of Parliament for York Outer, has met with the Minister for Children and Families, Nadhim Zahawi MP, to press him on the need for changes to the way that support for children with Special Educational Needs (SEN) is funded in schools.

It follows on from a debate in Parliament that Mr Sturdy organised in March in which he highlighted a string of cases brought to him by parents with children attending several different schools across York. The cases show a clear pattern emerging of children struggling to access appropriate support, leading to increased pressure at school and deteriorating mental health.

Often these children were missing out on support through an Education, Health and Care Plan (EHCP), with the number of children on the plans in York being significantly below the national average. Mr Sturdy discussed with the Minister how the current funding system penalises the schools that adopt the most inclusive approach to SEN provision, as they are expected to fund the first £6000 of support for every child with an EHCP from money that they would otherwise be able to spend elsewhere.

“I found Nadhim Zahawi very receptive to the points I raised, and I was reassured to hear that the Government have launched a public consultation on how the requirement of schools to fund the first £6000 of SEN provision is working in practice.

I would encourage all parents who are frustrated with the level of support available to their children to engage with this consultation via the Department for Education’s website.

Individual teachers and schools should be praised for the amazing job that they do in the face of multiple challenges.  We have a national funding formula that means that York’s schools have been historically underfunded and a SEN funding policy that leaves little to spare to adequately support the many children with high needs who do not have an EHCP.

I hope that addressing these pressures will be a priority for whoever becomes Prime Minister and I will continue working in Parliament to secure a change in approach at a national level.”